The Financial Matrix: How Money is Made?

8 replies to this topic 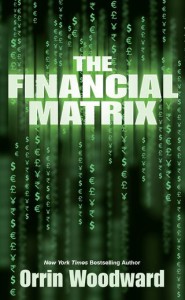 The key to the Financial Matrix is fractional reserve banking (FRB) partnered with the central banks which in turn is partnered with the national government. Without this trilateral banking cartel, the inconsistencies inherent within the unstable FRB system would collapse under its own weight.  My new book to be released by LIFE Leadership next week describes a plan to exit from the FRB fueled banking cartel and protect your family. How bad is the FRB system?

Imagine a game of musical chairs where the same chair is issued to 10 different people. While the music is playing (boom period), everyone is happy and the economy appears to be growing rapidly;  however, as debt increases, so too do the prices from the predictable inflation. Eventually the prices of houses, cars, and other big ticket items outrun the ability of the consumers to pay and the music stops. The “boom” period has now transformed into the “bust” period as the highly unstable and inflated money supply burst when the consumers cannot service the growing debt.

Not surprisingly, when the music stops, the consumers discover they do not have actual chairs (real commodity money) to sit down in. Thus, the weakest financially fall down to the ground first, but it doesn’t stop there. For the failure of the banks marginal loan qualifiers causes a cascading effect (I would say like a row of falling dominoes, but I don’t want to mix my metaphors

) until only the most conservative financially can survive at all during the bust. For example, remember how the failures of the riskiest mortgages brought the failures of many others who thought they had solid mortgages? The domino effects of bad bad loan failures to “good” loan failures happened when the housing prices dropped 50% or more during the “bust”. Loans, in other words, that are good when house is worth $500,000, are defaulted upon when house falls to only $250,000.

Of course, the banks win during the “boom” with massive amounts of profit from interest payments and also win during the “bust” because they are insured from loss by government bailouts and the central bank money injections. The coup-de-grace is when they also foreclose on real properties for pennies on the dollar leaving the debtor bankrupted.  Absurdly, the system is set up for “heads” the bankers win and “tails” the borrowers lose. For the consumers are bankrupted by the counterfeit paper chairs and the banks are bolstered by bailouts and property surrendered by debtors as collateral. Sadly, it doesn’t even end there.  Because now the bank cartel can start the music all over again, offering incredible interest rates and no money down, to seduce new borrowers into the shearing room for the next game of musical chairs.

The more I study the money system, the more amazed I am at the gullibility of the masses and governments to support a game that leads to their own demise. It’s seems like the modern world enjoys to punish itself for Big Banker profits. In reality, the Financial Matrix relies upon the unsuspecting people’s Financial Literacy ignorance. Indeed, few understand how money is created even though it is hidden from them. Rather, most people do not like to think upon issues that threaten them and choose the ostrich approach of working 8-10 hours per day for 40 plus years wondering why it seems they have to work harder every year for less gain.

Productivity increases around the world and yet the masses get broker and no one seems to know why. Then, paradoxically, we demand our government to help us even though they are the ones supporting the cartel hurting us. This would be like demanding a bully’s right arm to defend us from the bully’s left arm currently pummeling us. Do you really think that is going to work? To be sure, the national government will raise your taxes and launch numerous initiatives, but the money cartel isn’t afraid because no one gets elected without their approval (after all they can print money out of thin air, who is in a position to out fund them?) and financial support.

There is one thing, however, that the people could do. If they did so, it could change everything. Not just for themselves but for our nation. Get out of DEBT and stay out of DEBT! When the masses awake and learn Financial Literacy, I can promise you the banker cartel will tremble in its fiat paper boots. For only then will the people stop enslaving themselves for things they do not truly need. And, when the people set themselves free, then we are in the moral position necessary to demand the government set itself free from the Financial Matrix also. Isn’t it hypocritical, in other words, to demand our government to be debt free when we are not debt free ourselves?

The great economist of the Austrian School, Murray Rothbard studied how the Banking Cartel creates money:

Here’s how the counterfeiting process works in today’s world. Let’s say that the Federal Reserve, as usual, decides that it wants to expand (i.e., inflate) the money supply. The Federal Reserve decides to go into the market (called the “open market”) and purchase an asset. It doesn’t really matter what asset it buys; the important point is that it writes out a check. The Fed could, if it wanted to, buy any asset it wished, including corporate stocks, buildings, or foreign currency. In practice, it almost always buys US government securities.

But this is only the beginning of the inflationary counterfeiting process. For Chase Manhattan is delighted to get a check on the Fed, and rushes down to deposit it in its own checking account at the Fed, which now increases by $10,000,000. But this checking account constitutes the “reserves” of the banks, which have now increased across the nation by $10,000,000. But this means that Chase Manhattan can create deposits based on these reserves, and that, as checks and reserves seep out to other banks (much as the Rothbard Bank deposits did), each one can add its inflationary mite, until the banking system as a whole has increased its demand deposits by $100,000,000, ten times the original purchase of assets by the Fed. The banking system is allowed to keep reserves amounting to 10 percent of its deposits, which means that the “money multiplier” — the amount of deposits the banks can expand on top of reserves — is 10. A purchase of assets of $10 million by the Fed has generated very quickly a tenfold ($100,000,000) increase in the money supply of the banking system as a whole.

Did you get that? The Federal Reserve (Central Bank) writes a check backed by no real assets (its backed by the credit of American productivity)  to purchase Treasury Bills from one of the Big Banks. The Big Banks then starts the music and seduces its next round of musical chair debt participants (approximately 70% of USA money supply is created from house mortgages). The banks make interest on money created out of thin air, the government funds it debts, and the consumer play another round of musical chairs as the prices of everything rise during the boom and fall during the predictable bust. The people are sheared yet again because they do not understand the 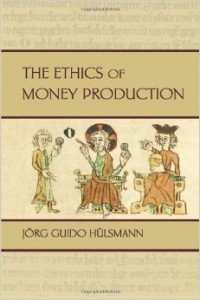 Jörg Guido Hülsmann, in his fascinating treatise, The Ethics of Money Production, described the fiat money and fractional reserve banking cartel. He explained the whole system relies on legal privileges and special deals for the few against the many. Hülsmann has nailed the reason why the Financial Matrix is thriving and why each reader ought to protect his family by eliminating ALL DEBT through applying the principles taught in our #1 bestselling product the Financial Fitness Program:

There is no tenable economic, legal, moral, or spiritual rationale that could be adduced in justification of paper money and fractional-reserve banking. The prevailing ways of money production, relying as they do on a panoply of legal privileges, are alien elements in the capitalist [i.e., true free market] economy. They provide illicit incomes, encourage irresponsibility and dependence, stimulate the artificial centralization of political and economic decision-making, and constantly create fundamental disequilibria that threaten the life and welfare of millions of people. In short, paper money and fractional-reserve banking go a long way toward accounting for the excesses for which the capitalist economy is widely chided.

We have argued that these monetary institutions have not come into existence out of any economic necessity. They have been created because they allow an alliance of politicians and bankers to enrich themselves at the expense of all other strata of society. This alliance emerged rather spontaneously in the seventeenth century; it developed in multifarious ways up to the present day, and in the course of its development it created the current monetary institutions.

…The driving force that propelled the development of central banks and paper money was the reckless determination of governments, both aristocratic and democratic, to increase their revenue, if necessary in violation of good faith and of all established rules of commerce.

In sum, government power, banker profits and the people’s pain all increase while the people freedoms and pocketbook decrease. This is the “joy” of living in the Financial Matrix.

Brilliantly researched and compelling argument, Orrin.  Can't wait to get my copy of this great new book!

Seriously, I'm obsessed, checking the site to see when I can sneak a big order of these books in.....there are SO MANY Americans praying for a way out of their poor financial decisions!  We're bringing the message baby!  ONE MILLION FREE FROM THE FINANCIAL MATRIX!

"There's nothing more fun, than kicking butt in a business!" C. Hamilton

Since I have known you, your passion for bringing truth to people has been unwavering. Its not just a little fad or phase you are going thru. I appreciate the example you set and I appreciate the work and effort you put towards this goal. THANKS

I can't wait to get his book! I have learned So-o-o-o Much about finance and economics since joining LIFE Leadership in 2013. It has really served to open my eyes to what is happening in our world. Thanks, Orrin and LIFE Leadership.

Donna Adcock<p>He who has the Son has life...

Great read Orrin, I can't wait to get my hands on the new book!

Can we get this in ebook as well?

Can we get this in ebook as well?

Yes, that is standard procedure for all the books that the PC write.

I feel this book will be a game changer.  I had the opportunity to read the Q&A section in the back and that is going to help a great deal!

Can't wait and I know many people who have not even hear about it, can't wait either.  Need to get this is everyone's hands and let them decide on the blue or red pill!

Well Done Mr. Woodward, you never seize to amaze me!

Back to Marketing System

Also tagged with one or more of these keywords: Financial Matrix, Orrin Woodward

0 user(s) are reading this topic